Two Muslins; One Wearable, One Needs...Work

I've had a couple of projects finished for a few weeks but I haven't been able to blog about them. First my camera went on vacation with my parents -they were over 20 kilometers from home when they realized they didn't have it, so I loaned them mine. Then it wasn't convenient for The Geek take pictures of the finished items. Just because she would be late for work, or silly things like that! I mean, really, where are her priorities?!?
I finally pinned her the other afternoon while the sun was still out.

This dress I cut out Labour Day weekend. It went together quickly, but it is a trifle to big. (I have to decide if I am going to sew for the size I am right now or hope that I regain the muscle I lost and I return to my former glory, and sew for that size. Decisions, decisions!) 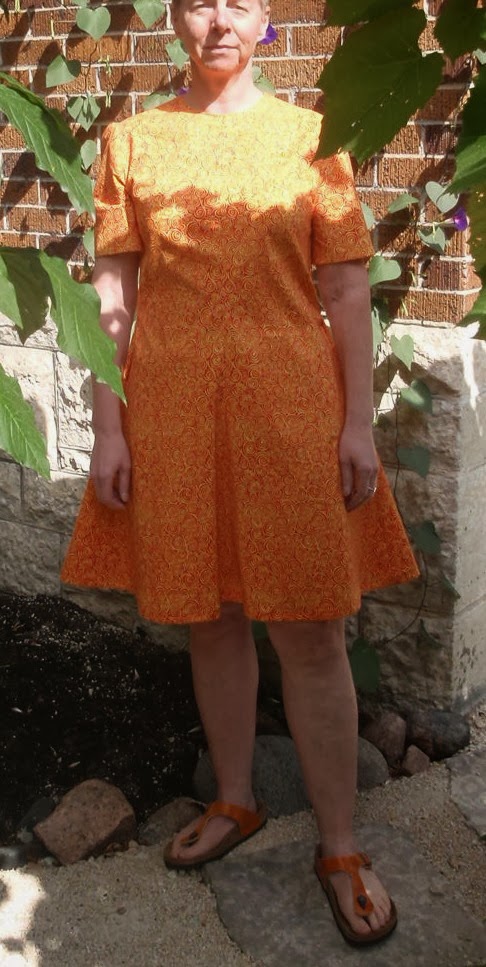 It is a pattern from the late '60s, early '70s that I picked up at the MCC in a major haul earlier this year. Judging by the envelope and the tape on the pattern pieces, it has been well used. I like that in a pattern. The fabric is a quilting cotton in a swirly pattern I felt was very '70s-ish. 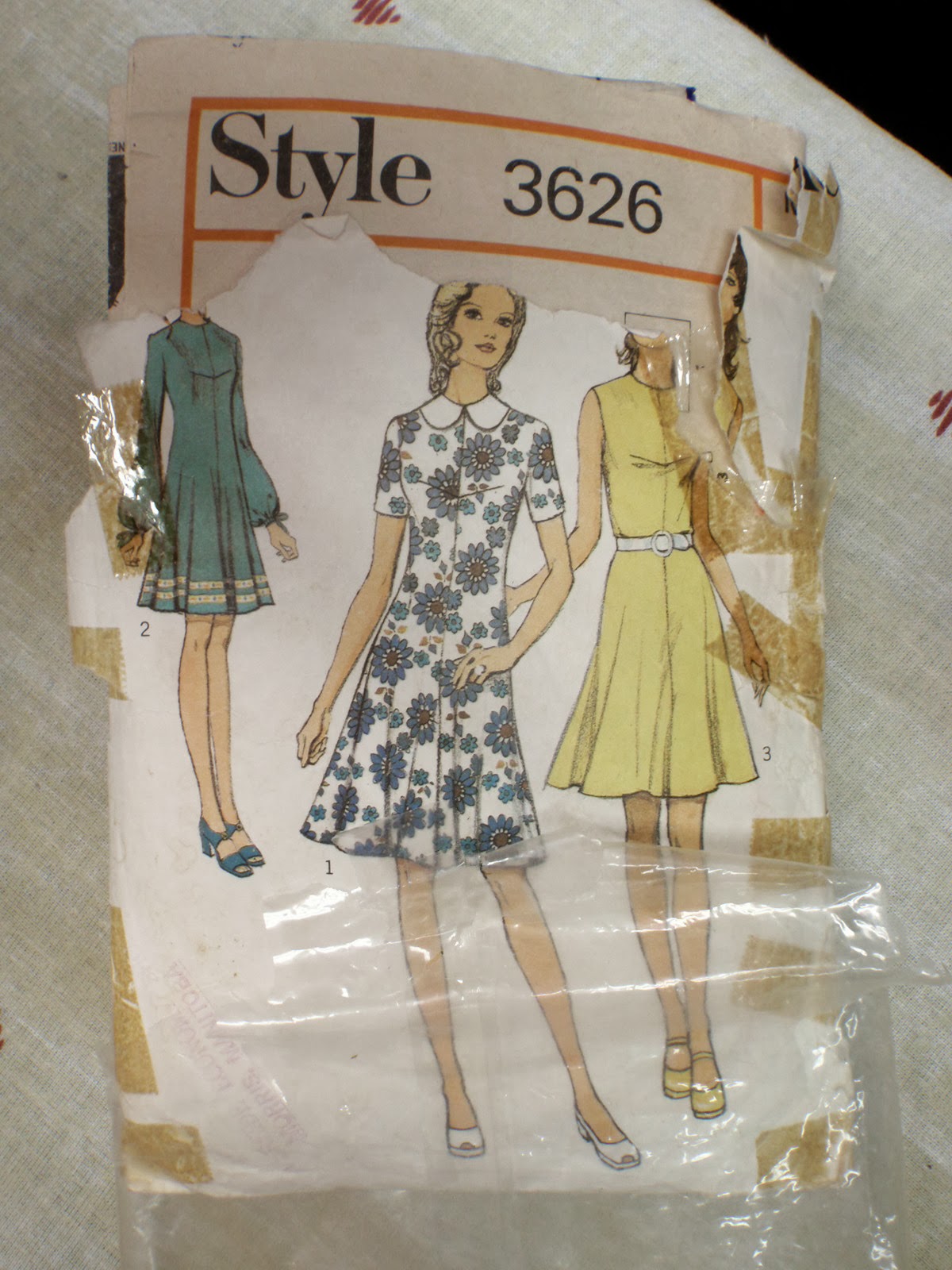 I thought adding pockets was a grand idea, but they pull the dress down in strange ways; I set them a little too high. 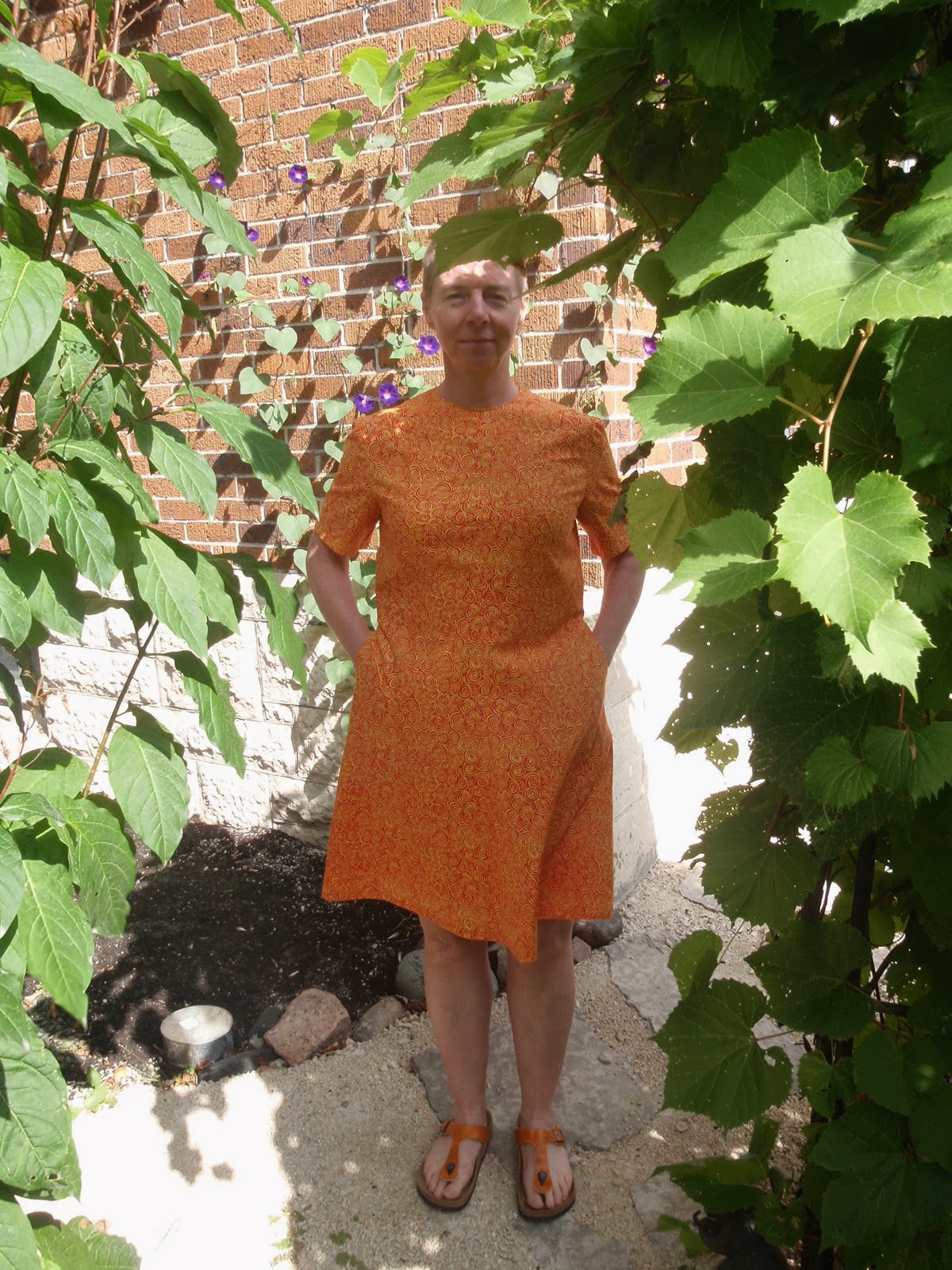 The back pulls a little strangely too. Those pockets may have to go. 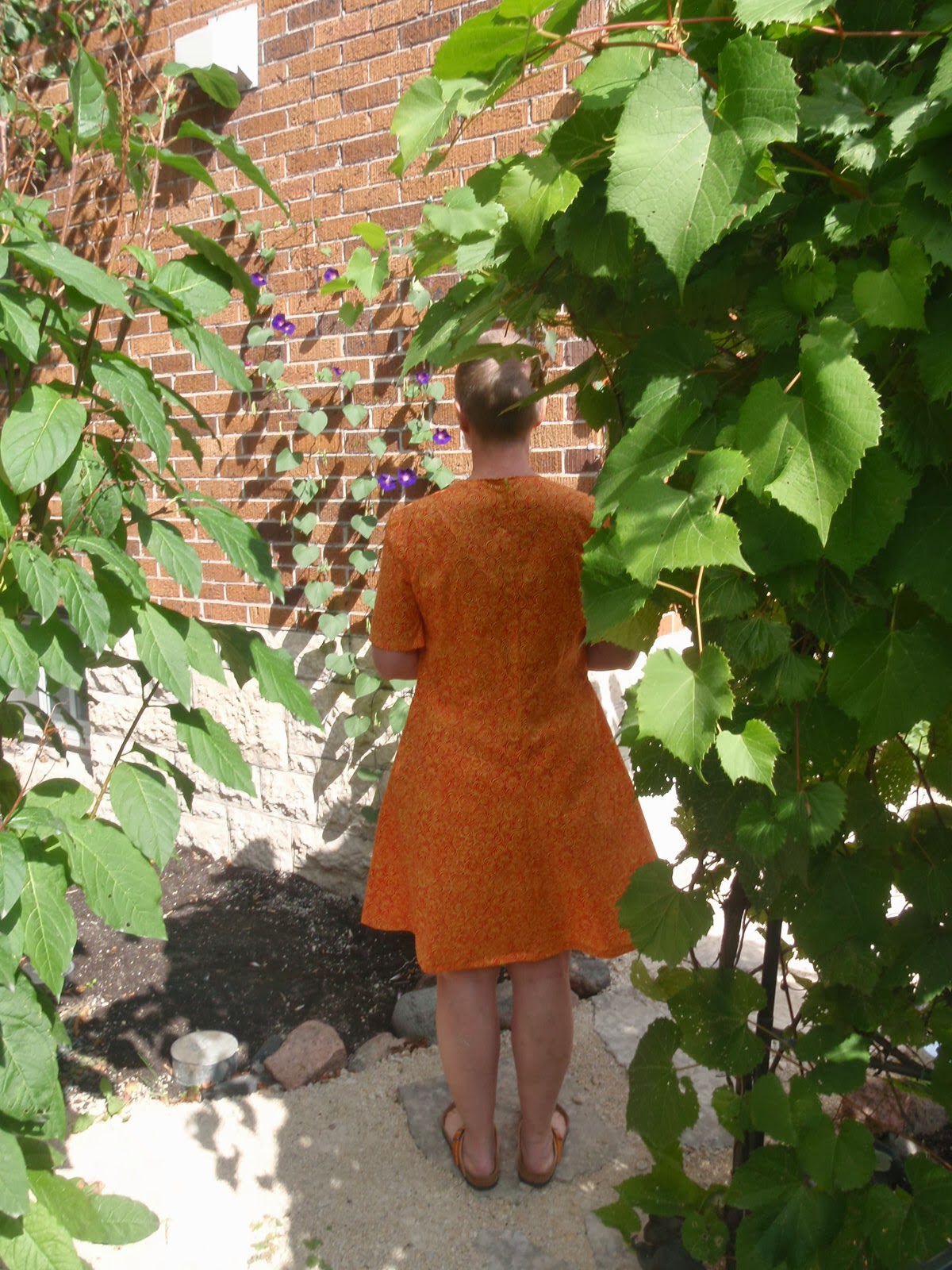 I took in the dress another 1.5 cm at the top part of the bodice but stopped where those dratted pockets are. The more I look at these pictures, the more I realize adding pockets was an ill-conceived idea. I think I'll take them out and run the narrowing seam down the entire side. Later. Summer is pretty much done now so this dress can hang in the contemplation corner for the winter. 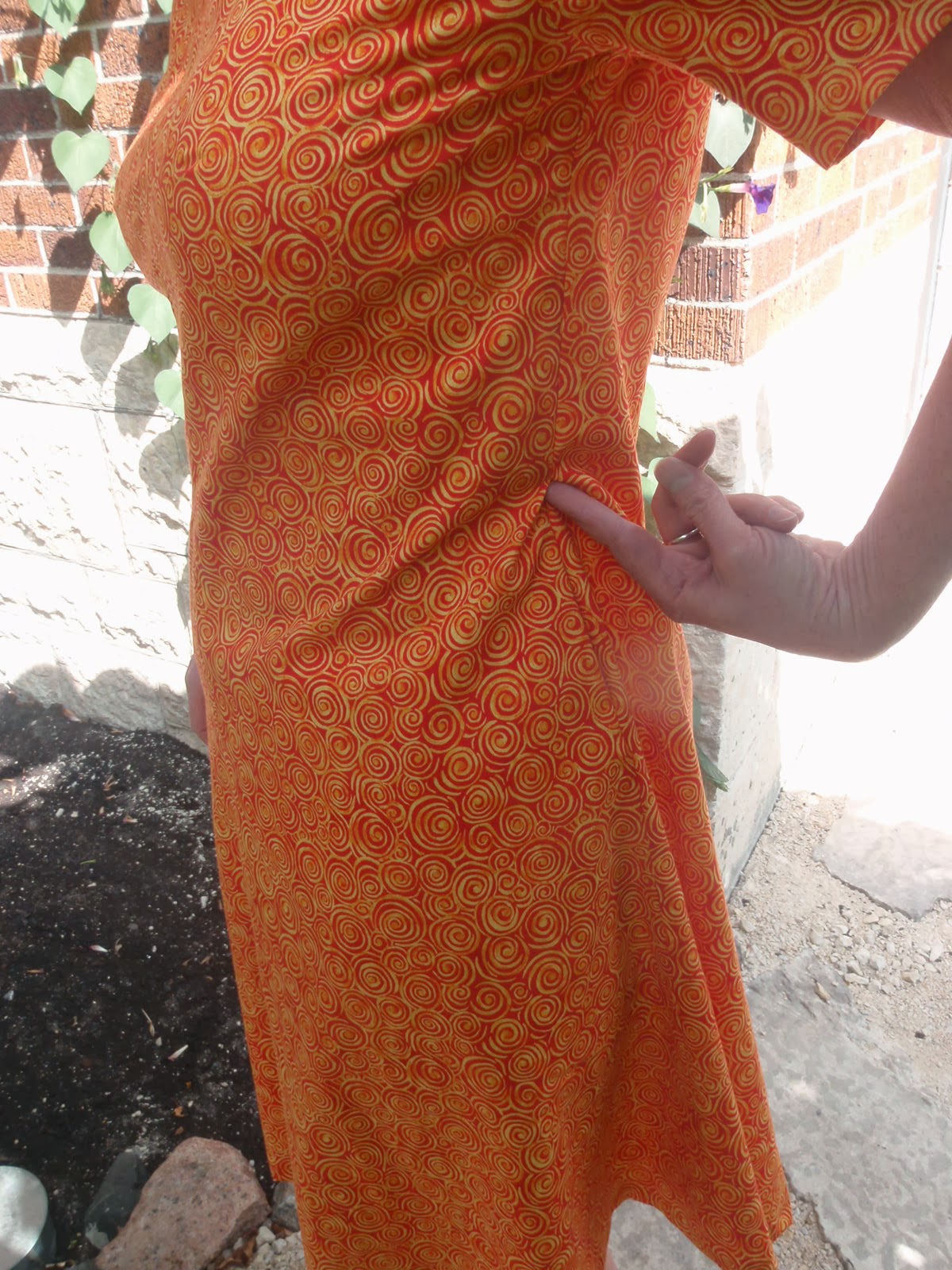 This second dress is Simplicity 2444, another MCC score. I bought it in spite of the ghastly green satin number on the outside of the envelope. I have seen this made up in several different ways all over the blogosphere and was glad I glanced at the line drawings before discarding it as ugly.

I had several garden-type parties to attend this summer and felt a garden style dress would be appropriate. 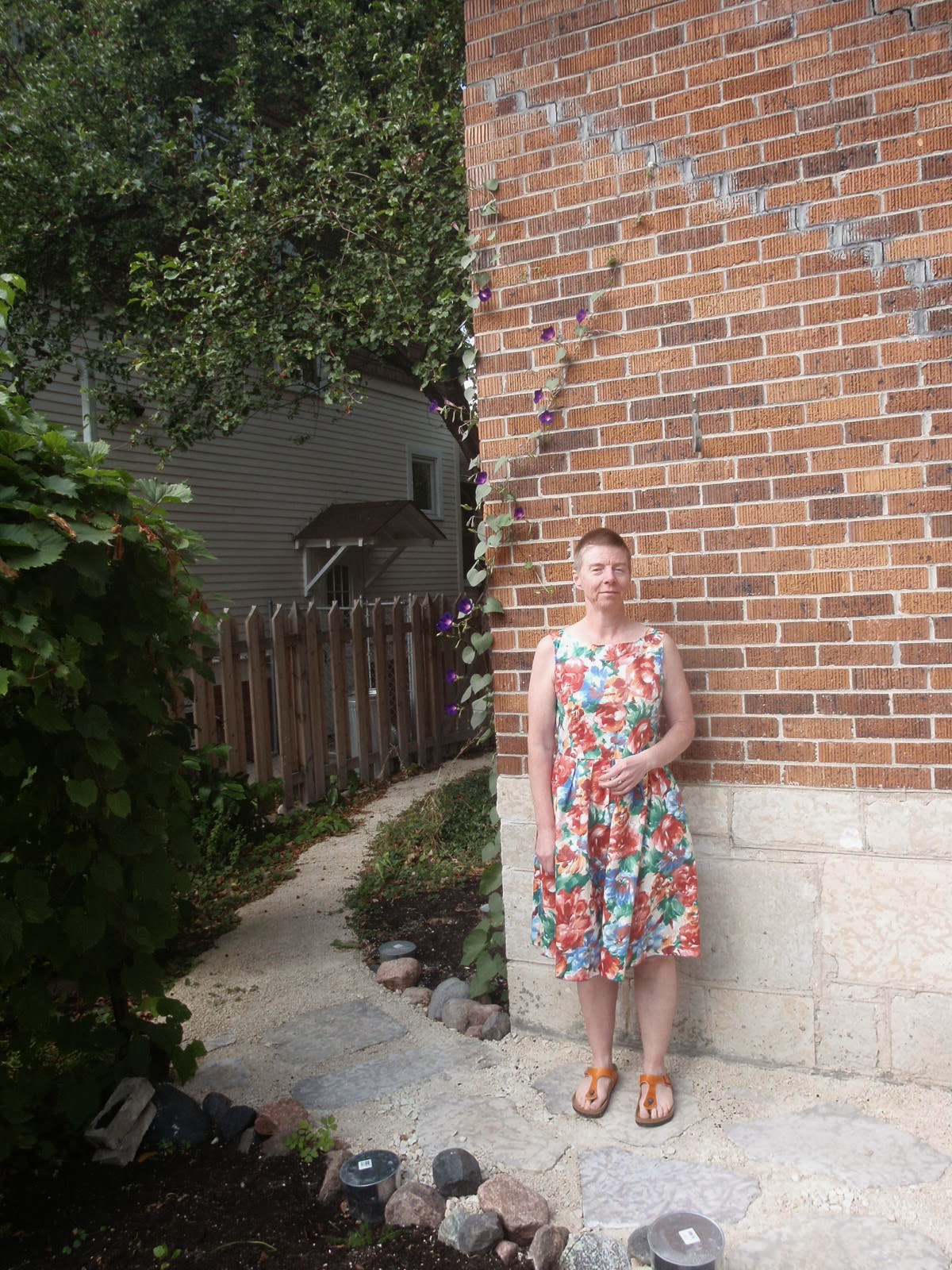 The fabric is from a garage sale for $2 including a spool of thread -we Winnipegger's do like our bargains. 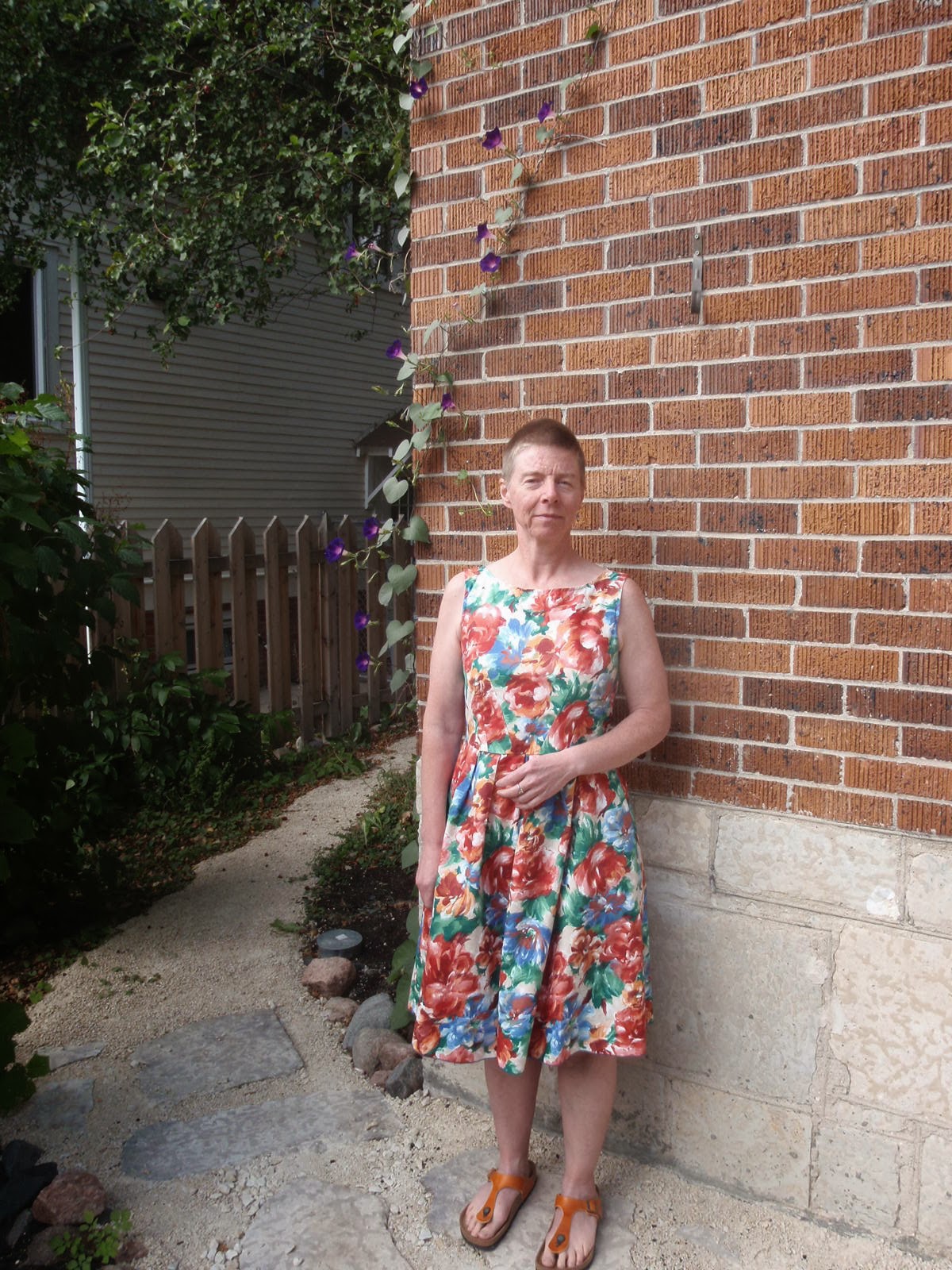 It has pockets. They are in the correct place. Enough said. 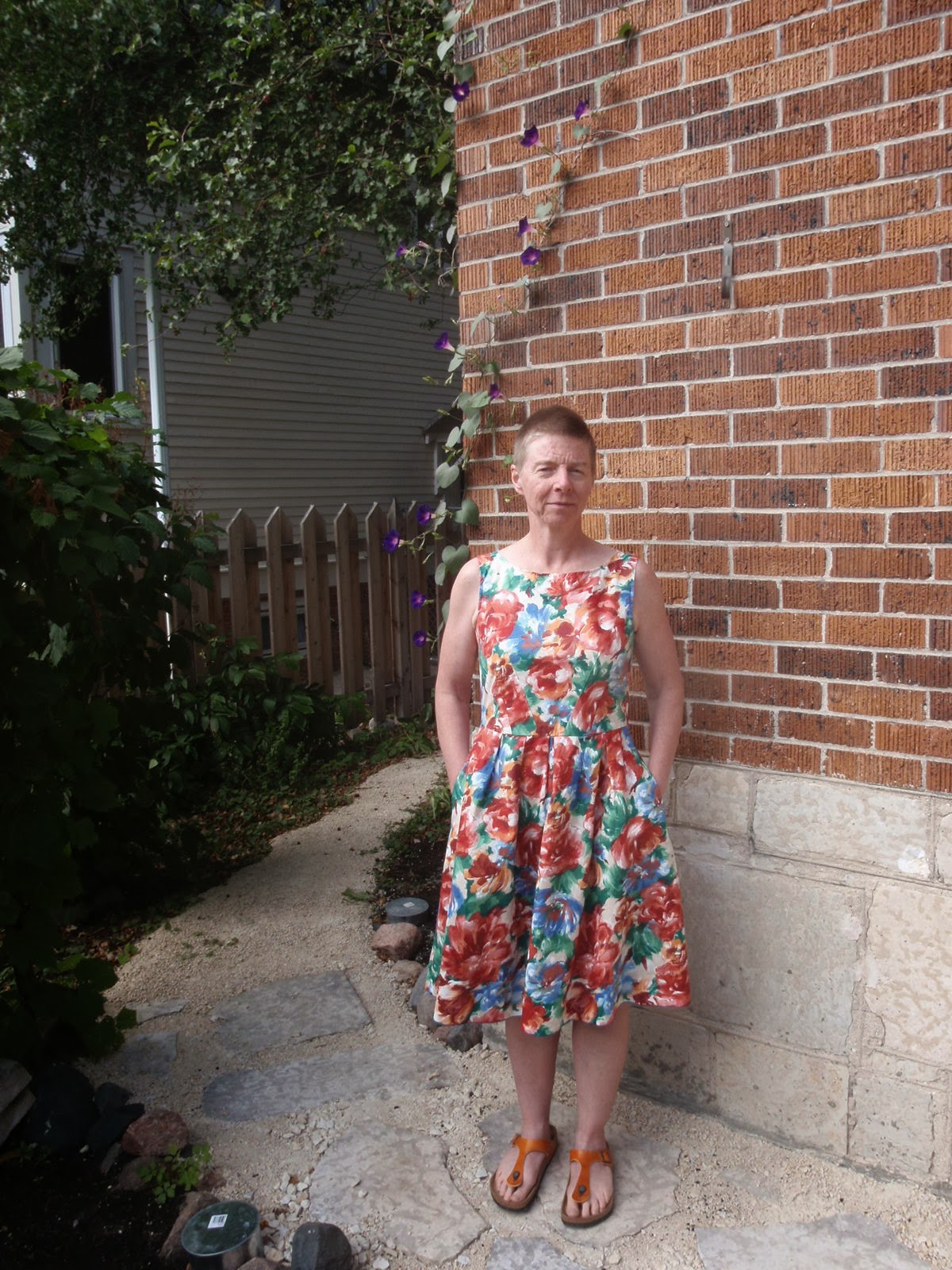 This was a quick and easy make and I really like how it looks. 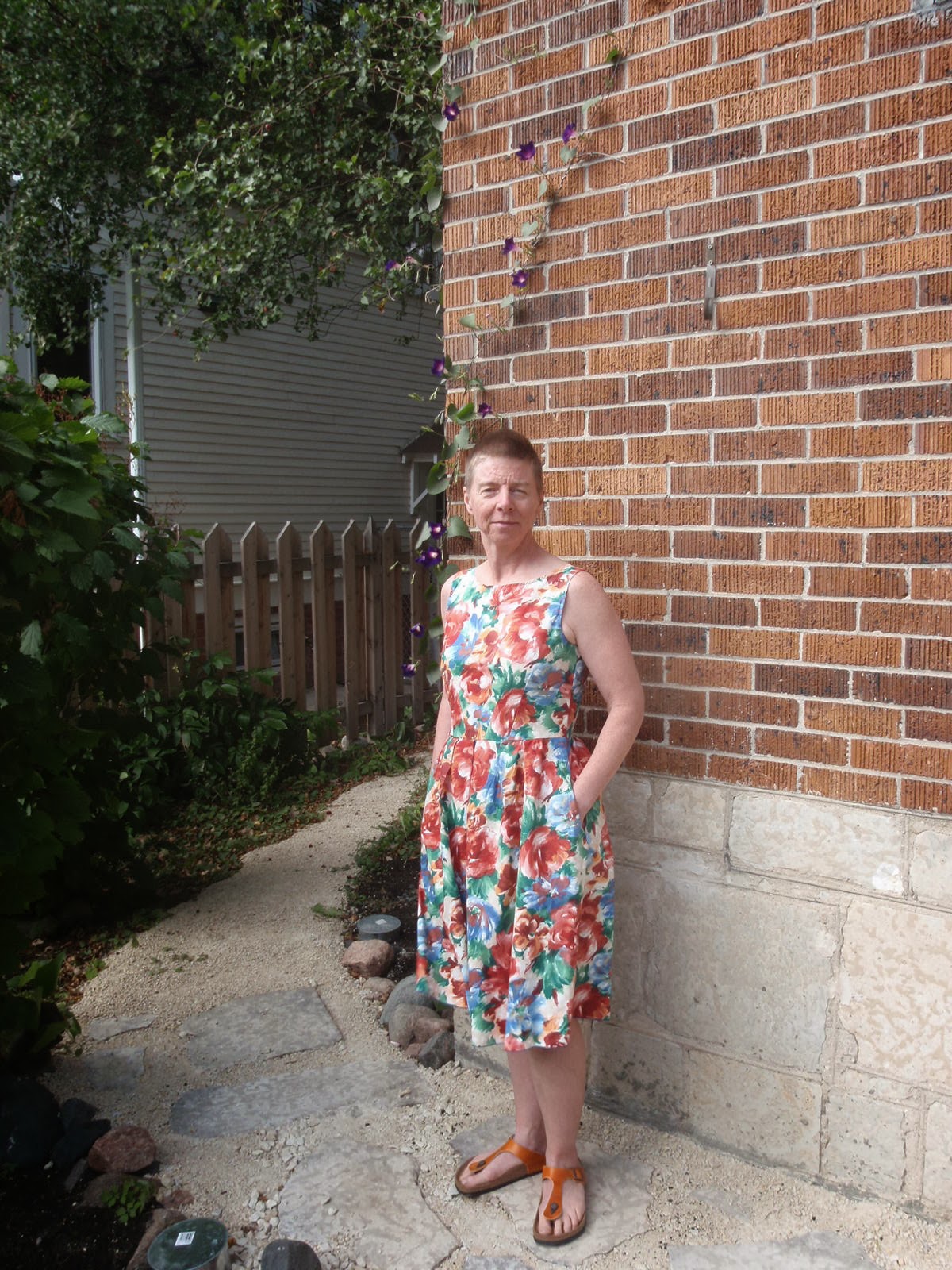 I wanted to have some morning glories in the pictures as they won't be around much longer, but I ended up squinting into the bright sun. A small price to pay I suppose. 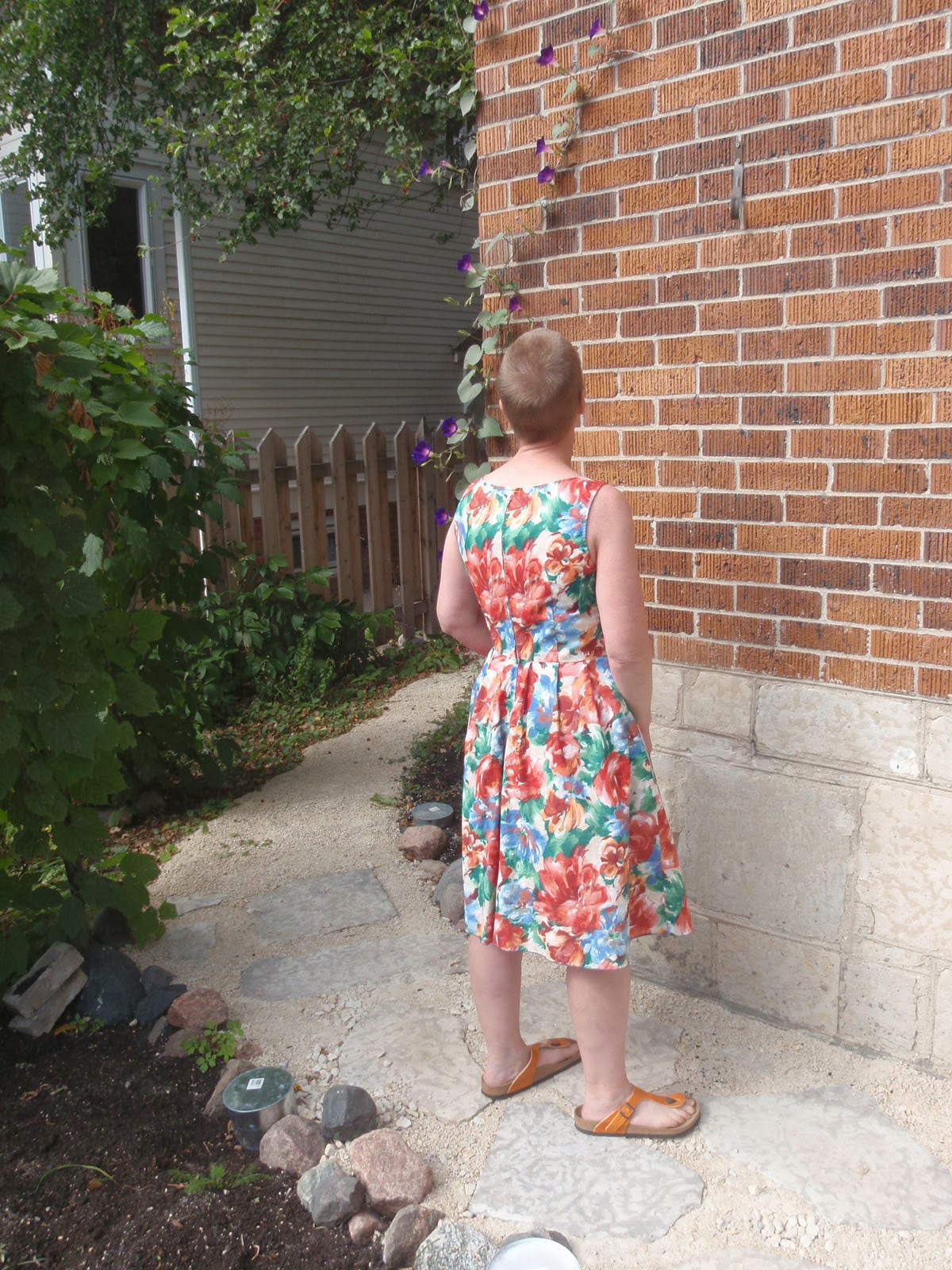 I wanted to add details about the construction, but I transferred all the photos from the card when I loaned the camera to parents, and now I can't remember into which file or onto which computer (first world problems), so you'll just have to take my word that the lined bodice made the armholes so much easier to finish.
I've received many compliments on this dress even tho' The Geek (self-appointed Chief Constable of the Fashion Police) does not like it. She thinks the flowers are much too big. I think that just means she won't try to borrow it any time. Win!
Posted by Sox at 16:21

Sox
I'm an observer and record-keeper of adventures and incidentals in the city of Winnipeg and beyond.

View my complete profile
While I am by no means old, it seems my brain is so full of day-to-day stuff that I can't remember things the same way. I used to be able to look at a dress I'd sewn and know what pattern I'd used, or be able to decide if I'd read a book by glancing at the first few sentences. That doesn't work anymore so I am starting a memory aid. If anyone else finds this useful, so much the better.